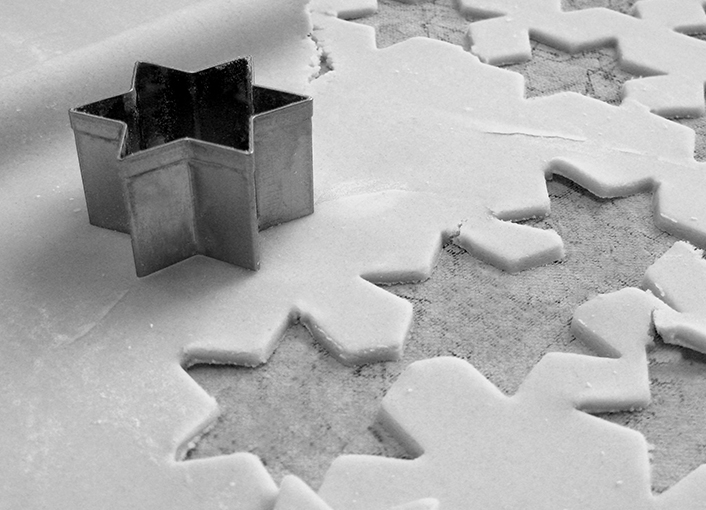 The countdown has started…  In just three weeks time, our little star-shaped cookie cutters will be returned to their box for another nine months.  The faint smell of brandy mincemeat that fills the air will begin to fade and Old John will be wheeled back into the corner again to enjoy a well-earned rest.  Don’t worry, Old John is the name we’ve affectionately given to our oldest piece of equipment – a wartime machine that presses pastry into little foil cases, forming the base of our Artisan Mince Pies.

Our mince pies are a true labour of love.  Old John may be a machine of sorts, but it still takes two people just to make a pastry case, even with his help.  Once filled with brandy mincemeat, a lid is delicately placed on top of each pie (handmade using two cutters) and they are hand dusted with sugar to finish.  When it comes to packing, the card sleeves are slid on by hand, secured in place with a strip of tape.

With all this care and attention required you can understand why not everyone here looks forward to making them.  But wouldn’t it be boring to just press a button and watch as thousands of identical mince pies are made by the minute, without even being touched by a human?  We think so.  Our all butter mince pies are not perfect clones.  One may have more sugar dusting than another; the odd star might be a little wonky; a lid could be ever-so slightly off centre.  In short, making them by hand gives them ‘character’.  In a world of mass produced, six-for-a-pound pies, that counts for something.

So next year, Old John will come out of hibernation again, we’ll dig out the cookie cutters, flex our fingers and the season will start in true festive spirit.

Right now, I’d better get back downstairs, those mince pies aren’t going to sugar themselves.

SIGNUP BELOW FOR THE LATEST NEWS & COMPETITIONS

DON'T WORRY, WE'LL NEVER GIVE YOUR DETAILS OUT TO ANYONE ELSE

We opened our bakery shop on Cotham Hill in Bristol on the 28th of February, more than a year after we started the re-fit, so thank you for your patience.  A shortage... Read More